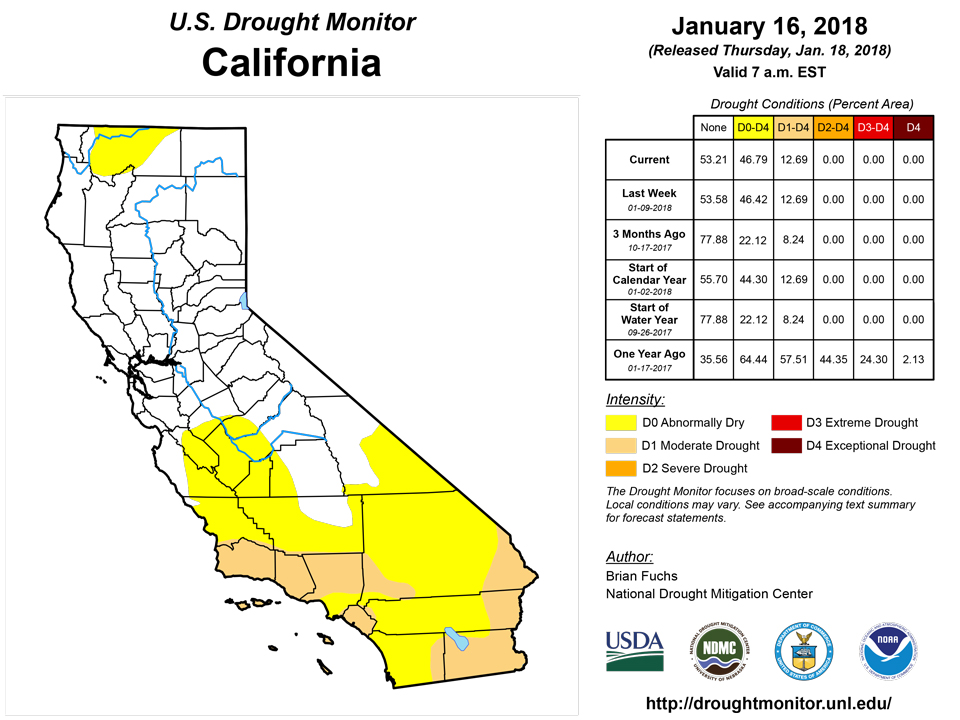 January 18, 2018 - A significant weather system impacted the lower Mississippi Valley and pushed northeast into the Ohio River Valley and the Northeast. The active pattern over the Pacific Northwest and northern Rocky Mountains continued, bringing much-needed rain and snow to these regions. Cooler than normal temperatures dominated the Plains region and the South, with areas of the northern Plains 15-20 degrees below normal. Warmer than normal conditions dominated the West, with areas of the Great Basin 10-15 degrees warmer than normal.

Temperatures were normal to above normal in New England with widespread precipitation over most of the region except for central Pennsylvania and western New York. Maine recorded the most precipitation, with amounts up to 2 inches in northeastern portions of the state. With the mix of rain falling on top of snow and frozen soils, the impact of the precipitation is hard to assess, but there was some response to streamflow conditions. No changes to the drought status were made this week and several reports indicated that without more precipitation in the region, conditions will worsen.

Much of the region recorded at least some precipitation this week, with isolated pockets of greater amounts in western North Carolina, western Virginia, and eastern Georgia. Some improvements were made to abnormally dry conditions in response to the greatest precipitation. Even with the precipitation in Alabama, most of the state ended the week below normal, and this allowed for further degradation in the state. Severe drought was introduced in central Alabama and a new area of moderate drought was introduced in northern Alabama into Tennessee. Moderate drought and abnormally dry conditions were also expanded in the central and northern portions of Alabama.In areas of southwestern Georgia and the Florida Panhandle, severe drought was expanded, and moderate drought was expanded in southeastern Georgia. The impact to the local hydrologic systems is starting to become more widespread throughout the region.

Most of the Midwest was dry for the week. The continued dryness over the last 3 months allowed for expansion of abnormally dry conditions over more of eastern Iowa, southern Wisconsin, and northern and central Illinois. The frozen winter environment has allowed for these changes to take place at a slower pace compared to other times of the year.

Much of the region did record precipitation in the form of both snow and rain during the last week, but amounts were generally less than half an inch. Some areas of east central Kansas did record close to an inch of precipitation. The most significant changes this week were due to a reanalysis of the data over the short term. From this analysis, the extreme drought over western South Dakota was improved to severe drought status. The impact designation also was changed from a combination of short- and long-term impacts to only long-term impacts. Dryness in southern Kansas and eastern Colorado continued with an expansion of the severe drought conditions to the west, incorporating all of southwestern Kansas and extreme southeastern Colorado. Extreme drought conditions were also pushed more to the west in southern Kansas.

Heavy rains impacted the region from southern Arkansas into western Tennessee. Up to 3 inches of rain fell in portions of this region and did allow for some improvements to the overall drought situation this week. Southern Arkansas and northern Louisiana had some improvement to the severe drought while moderate drought was improved over portions of eastern Texas. Despite the dry pattern over the last several weeks, the precipitation prevented further degradations in the rest of the Ark-La-Tex region.

In the Texas and Oklahoma panhandles, dryness continued and degradation was widespread. Extreme drought was pushed to the west in Oklahoma and south into the northeastern portion of the Texas panhandle. Severe drought was expanded to now cover all of the rest of Oklahoma and Texas panhandle regions. Extreme drought was also expanded over northern Texas while moderate drought and abnormally dry conditions were expanded over most of the central portions of Texas. There have been widespread reports of very dry soils, poor winter wheat stands, and lack of grazing on wheat, as well as low stock ponds. Cover crops have failed throughout this region and reports are coming in of complete dryness in the soils down 3-4 feet. A new area of moderate drought was introduced into southern Texas.

The coastal regions of the Pacific Northwest as well as the northern Rocky Mountains again had the most precipitation. Areas of southern Nevada and the desert regions of southern California and western Arizona finally recorded some precipitation. Areas of southern California that had experienced fires late last year were impacted by mudslides from the heavy rains that inundated the region. Even with the precipitation in Oregon, the water year continues to be well below normal for precipitation, which allowed for the expansion of abnormally dry conditions in Oregon, western Idaho, and southern Washington. A new area of moderate drought was introduced from central Oregon to western Idaho. In Utah, the low snow and snow water equivalency values caused an expansion of severe drought in central Utah and moderate drought in northeastern Utah. Abnormally dry conditions were pushed to include all of northern Utah and extreme southwestern Wyoming. In eastern New Mexico, severe drought conditions were expanded over the region.

No changes were made this week in Alaska or Puerto Rico. In Hawaii, the severe drought was removed from the Big Island as impacts have recovered enough to show the improvement. No other changes were made on the islands this week.

Over the next 5-7 days, the active pattern over the Pacific Northwest is anticipated to continue, with heavy rains along the coastal areas from northern California up to Seattle. Farther inland, precipitation should be widespread from Washington and Oregon into Idaho and western Montana, with the greatest amounts over the panhandle of Idaho. Precipitation from the central Rocky Mountains will pass through the central Plains and into the upper Midwest and Great Lakes. Much of the eastern half of the United States is projected to receive precipitation. During this period, temperatures are anticipated to be 3 to 6 degrees below normal west of the Continental Divide and 6 to 9 degrees above normal to the east. This should help bring the snow levels down over the western United States, allowing for snow accumulation to take place.The 6-10 day outlooks show that temperatures are anticipated to remain cooler than normal over the western and north central United States, with the greatest probability of below-normal temperatures over Montana and Wyoming. Warmer than normal temperatures are projected over much of the eastern third of the country, with the greatest chances of above-normal temperatures along the eastern seaboard from Florida north into New England. The probability of above-normal precipitation is great over much of the United States outside of the desert Southwest. The highest chances of above-normal precipitation are over the Great Basin and lower Mississippi Valley.

D0 Abnormally Dry—used for areas showing dryness but not yet in drought, or for areas recovering from drought.