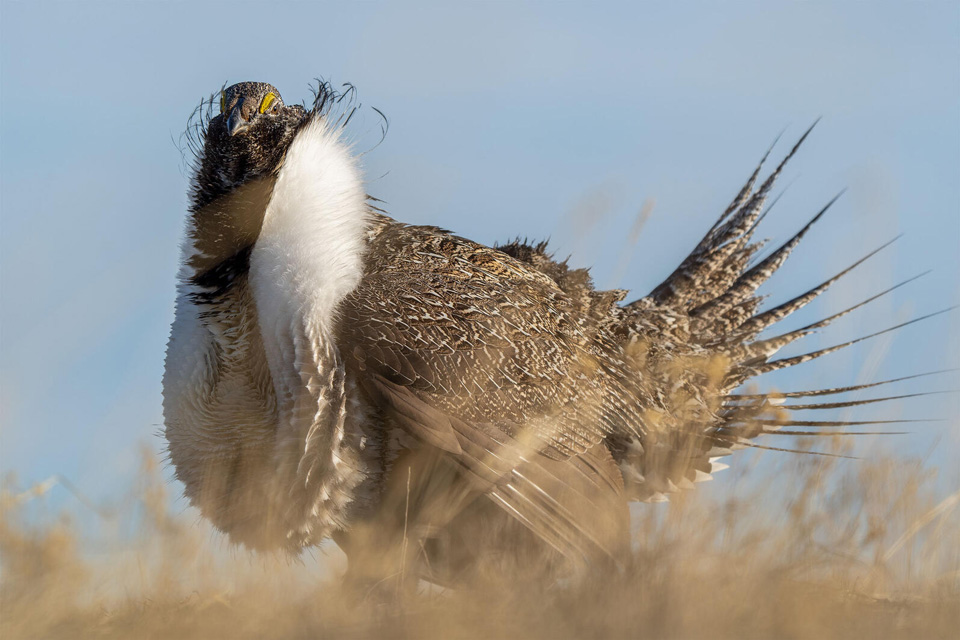 November 23, 2020 - WASHINGTON – The Bureau of Land Management released six environmental impact statements last week in its ongoing effort to expand leasing, drilling, and other industrial activities across millions of acres of habitat for the Greater Sage-Grouse. This range includes Idaho, Wyoming, Utah, Colorado, Nevada, California, and Oregon. This new review comes more than a year after a court found the agency’s previous process inadequate.

“This administration continues to ignore the best interest of western communities,” said Brian Rutledge, director of the Sagebrush Ecosystem Initiative for the National Audubon Society. “It looks as if the agency simply added a coat of cheap veneer to the old environmental review which the court invalidated. It is difficult to see how this disingenuous effort will satisfy Judge Winmill’s order.”

In its ruling, the court found that the BLM likely violated the National Environmental Policy Act (NEPA) in a number of ways by failing to consider the effects of making changes contrary to accepted science, failing to consider the cumulative impacts of the change across the affected states, failing to look at other alternatives, and failing to conduct additional analysis despite making major changes to the use of compensatory mitigation to address harm to habitat.

“They put more effort into writing the boiler plate language on how they conducted this second review than they did considering science or public comments,” added Rutledge “The people of the five states who worked hard on the solution they are attempting to undo and the ecosystem and bird that hang in the balance deserve much more than this.”

A July 2019 report issued by Audubon, along with the National Wildlife Federation and The Wilderness Society, proves the risks flowing from this administration’s actions, finding major increases in leasing and drilling in sage-grouse habitat authorized by this administration despite a requirement in the 2015 BLM plans to prioritize development outside sage-grouse habitat.

In response to a lawsuit brought by Audubon and other partners, a court held that the BLM’s actions violated the 2015 plans and went so far as to invalidate BLM’s guidance, yet that guidance is the “answer” provided to comments raising concerns with this practice in these environmental impact statements.

“BLM is explicitly relying on invalid guidance to justify their actions, showing just how far the agency has strayed from the path set out in the original plans and how little effort they have made to address court rulings pointing out the folly of their actions,” said Nada Culver, vice president for public lands and senior policy counsel at the National Audubon Society.

The role that the BLM plays in the management of the habitat where this iconic western bird is found is critical to determining its future, as a majority of the bird are found on federally managed lands across 10 states. The 2015 plans included strong science-based protections for the bird’s most important habitat and assurances that there would be limits to the amount of habitat damaged, which were the foundation for the U.S. Fish and Wildlife Service’s finding that the species did not warrant federal protection under the Endangered Species Act.

About Audubon
The National Audubon Society protects birds and the places they need, today and tomorrow. Audubon works throughout the Americas using science, advocacy, education, and on-the-ground conservation. State programs, nature centers, chapters, and partners give Audubon an unparalleled wingspan that reaches millions of people each year to inform, inspire, and unite diverse communities in conservation action. A nonprofit conservation organization since 1905, Audubon believes in a world in which people and wildlife thrive. Learn more at www.audubon.org and on Facebook, Twitter and Instagram @audubonsociety.
Source:  National Audubon Society